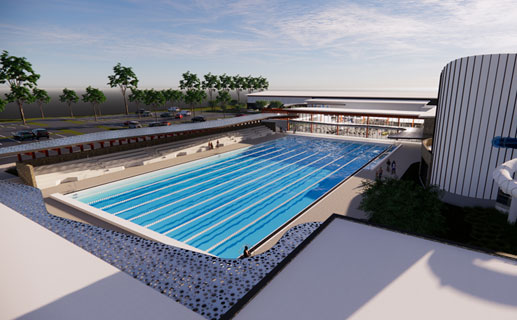 The Alkimos Aquatic and Recreation Centre is now in the detailed design phase following community feedback on the concept plan.  The concept plan showcases a fully–featured aquatic recreation facility which is only possible with an additional $30 million in funding. To date, both the federal Labor and federal Liberal parties have committed to provide an additional $25 million and $30 million respectively thanks to the community and the City pooling together to advocate for additional funding.

The project currently has funding of $40 million.  However, the cost to deliver all the facilities on the concept plan is $70 million. An additional $30 million in funding is therefore required to deliver a full-featured aquatic and recreation facility in your community.  For more information about the funded and unfunded facilities within the AARC, review the concept plan.

With the funding commitments now made by the federal Labor and Liberal parties, the City is on track to deliver a full-featured facility if one of the parties is elected in the upcoming federal election.

Following the federal election, the City will work towards ensuring the funding promised by the incoming Government as well as relevant elected members is honoured.

We thank our community for their support and efforts, which were instrumental in attracting the additional funding for the AARC.

Continue your support of the AARC by subscribing to this project to receive updates and news.

Thank you to everyone who participated in the latest community engagement on the Alkimos Aquatic and Recreation Centre (AARC), which was conducted over 8 weeks between December 2021 and January 2022.

The purpose for the engagement was to get feedback on the draft concept plan, which was made available through an online interactive plan.

Even though the engagement period is now over, you can still view the plan, people’s comments, votes and video walk through.

In July 2020 the City of Wanneroo Council endorsed a business case for the Alkimos Aquatic and Recreation Centre.

The new centre will transform Alkimos Central and bring significant social and economic benefits to the area and surrounding suburbs. The site will have easy access for the general public through the planned METRONET Alkimos train and bus stations, and via the Mitchell Freeway extension.

The construction of a public swimming pool in our northern coastal suburbs has been a high priority for the City for a number of years. In February 2018, Council unanimously carried a Motion on Notice approving the inclusion of an Aquatic and Recreation Centre development in the City’s Advocacy Strategy.

Currently, the only public aquatic facility servicing the City is Wanneroo Aquamotion, which includes a 25 metre indoor lap pool. For many residents, the closest facilities are HBF Arena and Craigie Leisure Centre in the City of Joondalup. The new North Coast Aquatic and Recreation Centre will be ideally placed to meet increased demand and provide greater convenience for residents of our northern coastal suburbs.

The business case recommends a staged approach to establishing aquatic facilities in the northern growth corridor; first at Alkimos Central and a second facility at Yanchep in the longer term, as Yanchep develops.