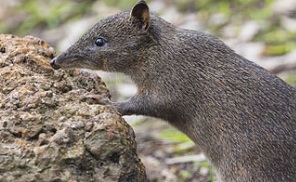 The City of Wanneroo is home to an amazing array of native fauna, but sadly some of these animals face extinction.

Boasting 32km of coastal foreshore and more than 120 conservation reserves, the City has many suitable areas to support native mammals including the quenda, western brush wallaby, possum, honey possum and western grey kangaroo.

To confirm where native animal populations are currently located, the City’s conservation team and volunteers have been monitoring our foreshore and reserves, and collecting data via trail cameras and on-ground evidence surveys.

In recent months, native quenda populations have been returning to areas from which they had previous disappeared. Fauna surveys also show returning populations of wallabies and kangaroos in some of the City’s larger reserves.

These results are a testimony to the City’s conservation work success.

The community can help play a role in quenda recovery by reporting sightings of quenda to the City’s Tree and Conservation Team on 9405 5000 or conservationmaint@wanneroo.wa.gov.au