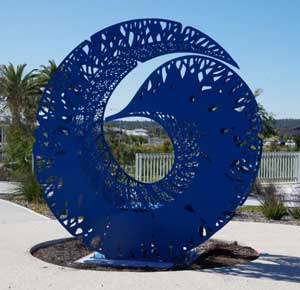 Artist Leanne Bray’s approach was to deliver artwork that best represents a holistic community with the strength of the circle as a symbolic reference to healthy community.

Embracing the concept of a ‘positive meeting place’ and creating a bold, clear statement that activates the gathering place and adds to the local aesthetic. Brought to life by taking something as authentic (to the Australian bush) as a simple gum leaf and transforming it – offering it in a furled fashion!

The shape reminiscent of the curl of a wave, with the intimate patterning wrought into its fabric: echoing the interwoven complexities of daily life and busy community. 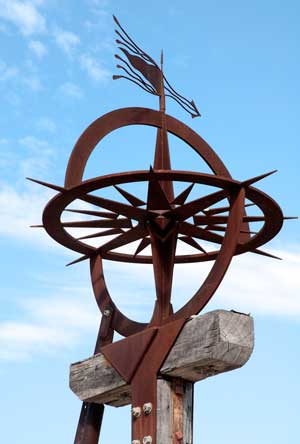 Artist Tony Jones used a substantial piece of recycled timber from the East Perth Claisebrook Cove area, with a joint T piece that formed the base for the steel work.

Tony has an interest in most things nautical including navigational instruments. The orb like circles that make up the upper form are reminiscent of an astrolabe and the rose with its points of the compass can be read as such. The steel leg takes its form from a set of map dividers. Most instruments have been redundant by GPS and digital technology and are often inspirational sculptural forms.

The sculpture Eglinton Boat Ribs is found at the meeting of Pipidinny Road and Marmion Avenue in Eglinton. It is a celebration of the 462-ton baroque ship, the Eglinton, which was the sensation of the year when it was wrecked off the coast of Wanneroo on 3 September 1852. Not only did it add to the list of unfortunate maritime incidents for which the Western Australian coast had become well known, but also deprived a very bare colonial market of a large portion of valuable cargo. The five rib elements of the Eglinton Boat Ribs can be interpreted in many different ways, but their shape generally alludes to parts of a wooden ship. 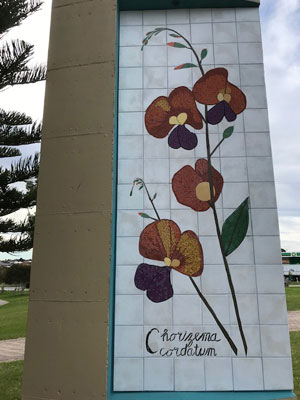 The Chorizema Cordatum is based on Perth's endemic flora.  These mosaics are part of the conservation and reinvention of the seven pre-existing artworks within Ridgewood Park.  Workshed Mosaics (Lisa and Paul Petale) worked together to create this latest piece (unfortunately due to covid-19 the school incursion at Mindarie Primary School was cancelled).  The revitalised public artwork can be appreciated by the many motorists utilizing Hester Avenue to access the freeway. 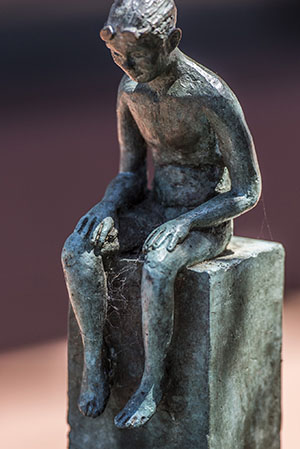 Each of these small bronzes allude to the lives of residents of the City of Wanneroo and their natural surroundings. The sculptures represent surfing, swimming, gardening and interaction with native fauna. The seven pieces on plinths are designed to be approachable, intimate works that are easily engaged with by passing shoppers. The detail and tactile surfaces of the bronzes invite participation, and provoke memory and stories. 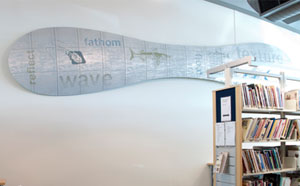 In 2004 artist Steve Tepper created this wall composition of two abstract lure forms from aluminium plate for the westerly internal wall of Clarkson Library. It was inspired by the spinning and a reflective quality of a lure as it moves through the water.

The concept drew from three themes:

The words are all words related to the sea and aim to stir the imagination. They float in blue/green tones above the shimmering, reflective, water-patterned aluminium surface.

This large artwork really creates a sense of place within the library and is an exceptionally beautiful piece. 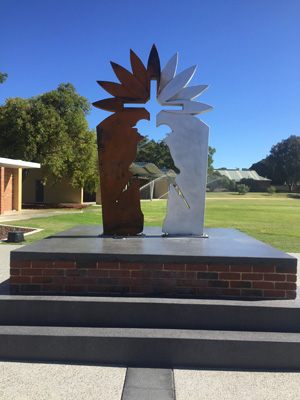 Artist Mehdi Rasulle designed this public artwork to reflect as a memorial to the Australian and Vietnamese servicemen and women who served in the Battle of Long Tan, Vietnam 1966.  The artwork represents the past, the coming together in the hardship of war, and the future as living together in a harmonious community.

The Koondoola Peace Park was constructed in April 2018 as a place of reflection and commemoration for local residents and their families who were involved in the Vietnam War. 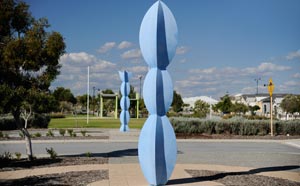 Tony and Ben Jones (father and son) are West Australian artists working predominantly as sculptors across a wide range of media and ideas. Cloud Column 1 & 2 are formal abstract responses to natural forms such as seedpods, leaf forms and flower buds. They are not representational, but more markers in the landscape.

Both sculptures are fabricated from steel; the various components were laser cut and expertly assembled to give a three-dimensional form.

Public art within the City of Wanneroo

Public art is in our everyday environment and can create a unique sense of place and enhance community ownership of places. Public art has a number of benefits including improving the attractiveness and functionality of the built environment, to produce landmarks that act as focal points and icons for the City, recognising local heritage and contributing to cultural tourism.

The City of Wanneroo has a number of public artworks in parks, road reserves and public buildings.