The City of Wanneroo will again host the biggest council led citizenship ceremony in the nation on Australia Day. 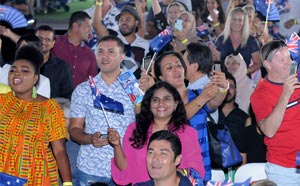 More than 1,000 residents from 65 countries were invited to take the pledge to become an Australian citizen.

Mayor Tracey Roberts will officiate at the ceremony which is the nation’s largest for the seventh year running.

“Australian citizenship is a great honour and all of our newest citizens will value what it means to officially become an Australian,” Mayor Roberts said.

“The Australian passport represents a culture of inclusivity and mateship that underpins everything we do.

“It’s always interesting to see the great mix of cultures and people who apply for Australian citizenship. The top five countries of birth for new citizens this year are South Africa, England, India, Ireland and Scotland.

“Our community spirit is strong and endearing and our newest citizens will be warmly welcomed.

“Just as our Pioneers did during the formative years of Wanneroo, our new citizens will contribute to the City’s economy and sense of community now and into the future.

“From that Pioneering past, the City of Wanneroo has grown to become home to more than 210,000 people. It is a fiscal powerhouse and major contributor to the state’s economy,” she said.

A free community breakfast cooked by the Scouts will be offered before the ceremony.

Over the past decade, the City has welcomed more than 6,500 people as new Australian citizens at our Australia Day citizenship ceremonies.

Citizenship ceremonies are also held throughout the year. Between 2005 and the end of 2019, 21,835 people have become citizens in the City of Wanneroo.