For the third year running, the City of Wanneroo will host the largest Australia Day citizenship ceremony in the nation. 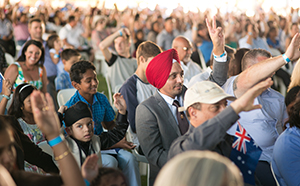 More than 816 residents from 67 countries are set to participate in the ceremony, becoming Australian citizens on this iconic day.

City of Wanneroo Mayor Tracey Roberts said she is pleased and excited that the City will once again hold the biggest ceremony in the country.

“It is such a symbolic day for our nation and I am proud that so many people choose the City of Wanneroo as a place to call home,” she said.

“Nearly 200,000 Western Australians live in the City and each year we welcome more than 8,000 new residents to the area.

“The City of Wanneroo is culturally diverse which is one of the many reasons why these citizenship ceremonies are so important, as more than 40 per cent of our residents were born outside of Australia,” she said.

Chaudhary Jamshad Ahmad, a Girrawheen resident who moved to Australia from Pakistan in 2007, says he is excited to become an Australian citizen.

“I love that Australia is such a safe place to live, and working here I’ve found great job security. It’s good because I live here with my wife and 20 month old daughter, and we have just had another baby a couple of weeks ago,” he said.

“Since I moved here I’ve lots of friends in the Girrawheen area. It’s a great community.”

“Australia is a beautiful country with beautiful people, and now I can call Australia my home. Nowhere else could be better than Australia,” she said ahead of receiving her citizenship at the City’s Australia Day ceremony.

“I love the equality and humanity here – the Australian government protects its people and country, and Australia invests money in education, health care, family and pensioner support and tries hard to be an even better country.”

This year’s event will feature special guest speaker Stacy Dunbar, who was WA’s Australian of the Year Local Hero in 2015. Stacy has been recognised for her road safety campaigning to reduce the number of accidents caused by drunk drivers and she will share her story on the day.

Adrian Barich will MC the event ceremony, Richard Walley will perform the Welcome to Country and local performer Billie Court and the Challenge Brass Band will entertain the audience. The Wanneroo Scout Group will be hosting a barbeque breakfast for those attending. Themed face painting and temporary tattoos will also be offered to guests.

Date: Tuesday, 26 January 2016
Location: Wanneroo Showgrounds, Corner Wanneroo Road and Ariti Avenue
Registration and breakfast: From 7am
Ceremony: 9.15am – 10.40am
Flag waving: Approximately 10.15am
Citizens and guests will be seated by 9am for a 9.15am start