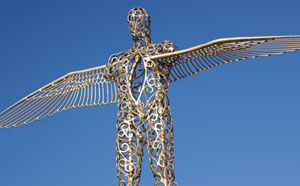 In December 2005 artist Simon Gilby installed a wonderful artwork entitled Sentinel on the foreshore of Quinns Rocks. This work is reminiscent of Anthony Gormley’s Angel of the North, which dominates the skyline at Gateshead in the U.K. on the A1, which runs from London to Edinburgh. Whereas the U.K. Angel celebrates the coal miners, who for 300 years worked in the mines under the surface where the sculpture stands, the Sentinel in Quinns was designed to move like a wind vane and was a figure with wings designed to stand sentinel for those at sea.  Sentinel means a soldier or guard whose job it is to stand and keep watch.

The artwork is 6.5 metres in height (including the tripod) and the life size human figure has been forged from stainless steel rod. The figure was built to be able to rotate and tilt indicating the strength and direction of the wind. Unfortunately, being so close to the Indian Ocean the Sentinel’s ability to rotate has been curtailed. 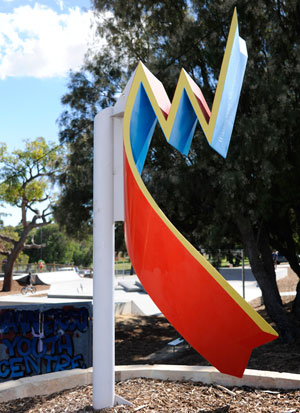 The Showgrounds Marker was designed and created by artist Don Walters in 2010. It was placed as part of the Civic Trail on the corner of Ariti Avenue and Wanneroo Road to celebrate 100 years of the Wanneroo Show.

The steel structure is based on a first place ribbon that’s folded into a W. The Wanneroo Showground was developed over several years at the 15 mile peg, and the first Wanneroo Agricultural Society Show was held on 21 April 1909. During the 1920s and 30s the Show became very popular and continues to be an exciting annual event. It is still run by the Wanneroo Agricultural Society, with a great community component, and is undertaken over Friday and Saturday in late November. 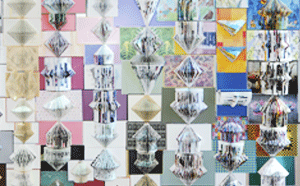 In 2015 Clarkson Library staff identified that they would like an interesting artwork at the northern entrance of the library, so began the community art journey to the Sculpted Book Wall.

Looking at the space, a single artwork would be lost and potentially bleached by the radiant light from the glass doors. The other factor was the readily available and free material for the artwork, surplus “books”.  The expertise of book sculptor, illustrator and artist, Sally Watts, was utilised in a series of free workshops for the surrounding community, where the participants learnt skills in folding books, some to take home and some to donate to the Book Wall.

The series was so popular that it was extended as more of the community became involved. Diane Tweedie (Arts Development Officer), Bryce Kershaw (Wanneroo Museum Curator) and Sally Watts (artist) created the Sculpted Book Wall and a community celebration was held for contributors to the new artwork. It is now a popular selfie site.

Public Art of the Month - September 2018 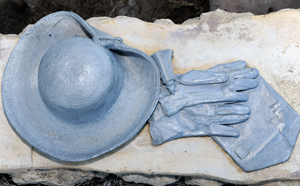 Like Mary Lindsay herself these two artworks in Lindsay Beach Park are intended to intrigue … It was well known that Mary Lindsay always carried a salt shaker in her pocket, she used this to scatter wild flower seeds onto her land as she walked. The salt shakers in this sculpture encapsulate Mary Lindsay’s unusual but sympathetic relationship with an environment she obviously loved. Artist Judith Forrest’s salt shakers are in a variety of styles, almost like a hobbyist’s collection. Local plant names have been engraved onto the shakers.

Although her father was Australian, Mary Lindsay typified the English eccentric; a woman born into wealth and social position, who feels she has nothing to prove. Certainly she enjoyed her notoriety and the question mark brooch depicted on the wall sculpture was always worn in her hat. This brooch was a gift from her husband to commemorate the birth of their child. As Judith Forrest says, “The casual observer will see the hat and gloves and salt shaker lying in the park as if left behind by an absent minded visitor. They will notice the question mark brooch and it will once again incite curiosity.”

Mary Lindsay’s former Yanchep home has recently undergone major redevelopment, after conservation assessment determined there was too much asbestos in the building, and officially opens this month as the Mary Lindsay Homestead.

For more information about Mary Lindsay and the history of what was known as the Yanchep Estate, visit the Community History Centre at the Wanneroo Library and Cultural Centre. 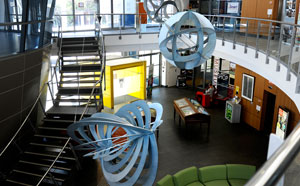 If you have ever visited the Wanneroo Library and Cultural Centre, your attention may have been drawn to three spheres hanging suspended over the great court. This public art piece is called 'Seeds, Fruits and Flowers' and was created by artist Ric Vermey.

Inspired by our past, the sculptures are geometric abstractions and refer to the primary activity in the development of the district – that of growing fruits and vegetables for market. Growth is a pertinent theme for artworks situated at the Wanneroo Library and Cultural Centre where activity revolves around art, history, learning and literacy; celebrating new ideas and our collective heritage. 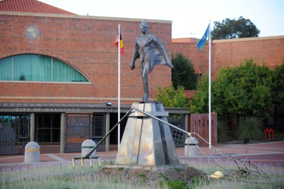 Looking West by Jon Tarry is located on the Dundebar Rd roundabout in front of the Wanneroo Civic Centre. This popular sculpture is constructed from cast steel, granite and stainless steel, and depicts a figure striding out atop a granite base with a fishing net on one side and a rake on the other. Jon Tarry created the figure facing west into the wind off the sea, like a sheet of cloth in the wind.

The figure welcomes visitors to Wanneroo and pays homage to the City’s market gardening and fishing heritage. The rake symbolises gardening, growth and cultivation. The net similarly indicates the theme of harvest and life. 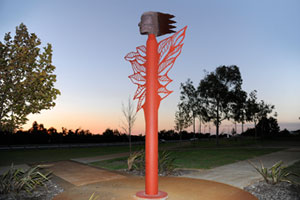 Frequent commuters along Connolly Drive in Ridgewood may recognise this stunning winged sculpture created by renowned artist and sculptor Tony Jones. Standing at five metres tall, ‘Winged Figure’ is constructed from steel and timber and is located in Tarbert Park.  A connection to the wind is a common thread among a range of Tony’s sculptures and when asked about the sculpture, Tony replied “I like the idea that by observing the direction of the wind, you can learn something about the weather. I.e. if it is facing east, it is likely to be a warm sunny day, facing south west, a cool breeze is in, and if north west, possibly rain…”

The head of the sculpture was made for another project almost 20 years ago and was stolen a few days after the installation. Tony then had to make another head to replace the stolen one. Years later, the stolen head was returned and it was given a new lease of life by being reworked into what became ‘Winged Figure’. 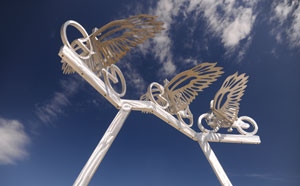 This flock of silver bicycles created by sculptor Tony Pankiw and named “The Enlightened Bicycles” is sure to inspire. Complete with a fully functional bike rack, this fun and evocative public artwork is located at Pearsall Hocking Community Centre and is designed to promote the benefits of an active lifestyle by encouraging community members to walk or cycle to the centre. 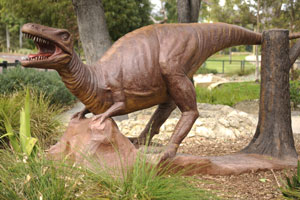 If you visited Kingsway Regional Playground in Madeley, chances are you have spotted a throwback to the Jurassic period.

Ozraptor and Skeletal Bones by Mehdi Rasulle was fabricated from stainless steel and concrete and coloured with oxides.

Near the dinosaur is a fossil of an ozraptor skeleton buried in sand that allows kids to play paleontology by digging and uncovering the fossil.

The ozraptor was a theropod dinosaur that roamed the Australian continent during the Jurassic Period while Australia was still a part of Gondwanaland. 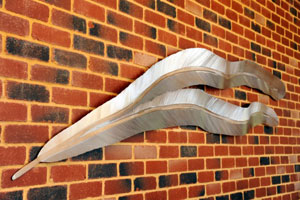 Emu Feather created by Si Hummerston and located the foyer at Koondoola Community Centre makes reference to the meaning of the Noongar word 'Koondoola' being 'Place of Emu', this stunning work is created of polished aluminium with areas of translucent colour that seem to change as you walk past.

More of Si Hummerston’s work can be seen in the grounds of Koondoola Community Centre including Bush Walk which consists of three life-size unique figures made of corten steel and jarrah. Each work uses a 3D shadow box design with 2D cut outs that form a bushland vista inside the body of each piece. They also include native flora and fauna such as kangaroos and emus that were common to the area