The City’s Volunteer Bush Fire Brigade will be undertaking a prescribed burn at Doogarch Park, Carabooda on Saturday, 24 April 2021 at approximately 8am (weather permitting).

City of Wanneroo residents and other stakeholders are invited to have their say on the City’s first ever Local Area Plans. 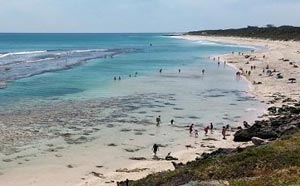 Draft Local Area Plans have been developed for Girrawheen and Koondoola, and Yanchep and Two Rocks, and are available for public comment until 25 August.

The plans were developed with input from more than 2,000 local people who provided comments and ideas through the City’s web-based community engagement platform Your Say, an interactive mapping tool, surveys and local face-to-face events.

Mayor Tracey Roberts said the plans highlighted the places and services that are important to local residents and outlined how they would like to see the area progress in future.

“The City of Wanneroo spans 684 square kilometres, including market gardens, bushlands, rural, urban and coastal landscapes, and the City’s residents are just as diverse as the geographical areas in which they live,” Mayor Roberts said.

“These new plans were developed as a meaningful and practical way to clearly identify the characteristics of Girrawheen and Koondoola, and Yanchep and Two Rocks that are most valued by their individual communities.

“The plans form an integral part of the City’s Place Framework, an approach that guides how unique places across the City will be developed, managed and activated now, and into the future.

“Through input to our current Strategic Community Plan, it was evident that our community is wanting distinctive, unique and vibrant places in which to live in the City of Wanneroo.

“Information in the plans will assist the City to better understand what our community values about their local area, and help ensure that the City and other relevant service providers respond to genuine local priorities.”

People can view copies of both Local Area Plans on the City’s website wanneroo.wa.gov.au/yoursay or at the Girrawheen, Yanchep Two Rocks and Wanneroo libraries.

Feedback about the plans may be submitted online via Your Say, emailed to communityengagement@wanneroo.wa.gov.au, or posted to City of Wanneroo, Locked Bag 1, Wanneroo, WA 6946.

“We hope to receive feedback from as many local people as possible, so we can be sure that the Local Area Plans truly represent the community and their hopes for the future,” Mayor Roberts said.

“However it is important to note that these two plans mark only the beginning of the City of Wanneroo’s Place Framework journey, as we intend to develop additional Local Area Plans for other suburbs in the near future.”