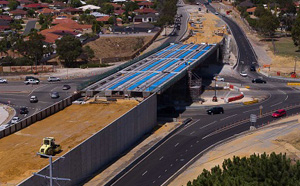 PLEASE NOTE THIS INFORMATION IS PROVIDED BY MAINROADS WA

Crews have been busy working on top of the new bridge installing the deck reinforcement and preparing for the second part of the concrete deck. Works have also progressed along both ramps as well as on the construction of the road on the north side of Joondalup Drive.
During February 2020, barriers will be installed on top the bridge, the ramps will be close to being backfilled and the installation of the MSE panels will be complete. 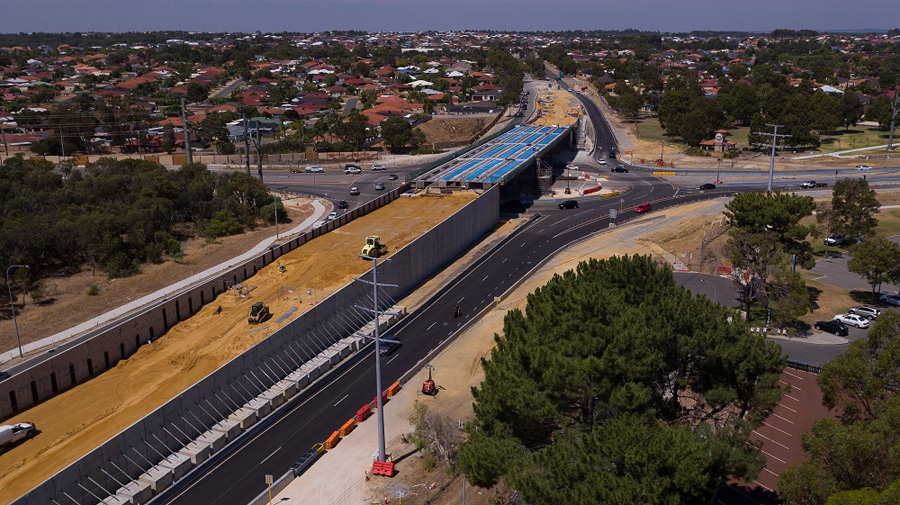 The reinforcement on the first two spans was finished on the 23 January and the concrete was poured that night. Reinforcement is now being completed on the final two spans with the concrete pour due for early February. The pour will be undertaken again during night shift to ensure the concrete remains cool, and the risk of a concrete truck being held up in traffic is minimal.

The concrete will then be left to cure for one week before any further works can be undertaken. After that time, 64 concrete barriers that are 4.8 metres in length, and weigh 9.2 tonne each will be installed along the sides of the bridge and in the middle to separate east and west bound lanes. The cranes will lift the barriers from the trucks on top of the ramps and from underneath the bridge in the roundabout.

Other works will include connecting the bridge deck to the ramps. This will involve pouring two concrete approach slabs the width of the ramps and about 5 metres long. Works will also continue into March 2020 on the concrete reinforcement ‘L’ walls along the ramps. On the east side, works will progress on building retaining walls at the end of the ramps. Once finished, the ramps will be ready for the final backfill and pavement construction.

Construction of the north side of Joondalup Drive between Burns Beach Road roundabout the new bridge is nearing completion. During one night shift in early February, traffic will be switched onto this new section of road. The road will remain open during these works and impact to drivers will be minimal.

Following the switch the final 30 mechanically stabilised earth (MSE) panels will be installed along the west section of the ramp. This will take a couple of days and not impact traffic.

Out of hours work