Keen skaters in the City of Wanneroo’s southern suburbs have been hard at work practicing their ollies and kickflips, following the opening of a new skate park at Warradale Park in Landsdale. 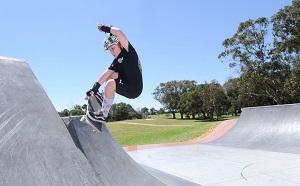 The $670,000 park is already proving to be a big hit with the locals, who were carving up the ramps on their skateboards and scooters during the official opening earlier this month.

Local resident Melissa said her two daughters, Kayla (11) and Emily (7), were regulars at the new park.

"Having a skate park so close has made a huge difference to their confidence," she said. "They are here after school most days - and sometimes before school!"

Fellow Landsdale resident Cameron said the new park provided his daughter Fleur (5) with a great way to socialise with other children her age.

“We went out and bought a scooter right after the park was put in,” he said. “We walk the dogs in the evenings and Fleur will bring her scooter along. She’s taking big steps and improving all the time.”

Wanneroo Mayor Tracey Roberts said the new facility was the result of a local petition submitted by the Landsdale Residents Association, who were delighted to see their wish come to life.

“Since it opened to the public earlier this year, the skate park has attracted eager skaters from right across Perth,” she said. “I have no doubt it will appeal to everyone passionate about skating, scootering and BMX riding.

“The initial design of the skate park was completed with input from families and enthusiastic school children, and there are many features that appeal to users of all ages and skill levels.”