; Connecting our past with our future through sustainability - City of Wanneroo
Menu
Navigation
My Wanneroo Register Sign in

Connecting our past with our future through sustainability

Embracing feedback from the future of the City through its youth groups, Wanneroo Council has endorsed the City’s revised Climate Change Adaptation and Mitigation Strategy 2020/21–2025/26. 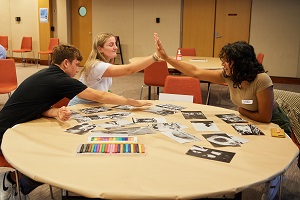 The City conducted extensive community consultation, including a Youth Forum on Climate Change, to explore steps it could take to reduce the impacts of climate change on residents and the wider community before the Strategy was endorsed at Council’s 11 May meeting.

The Climate Change Adaptation and Mitigation Strategy outlines a range of short, medium and long-term actions to help the City respond to the impacts of climate change as they arise, with a focus on mitigating temperature increases, reduced rainfall, extreme weather events, rising sea levels and greenhouse gas emissions.

City of Wanneroo Mayor Tracey Roberts said the Strategy was a critical step in strengthening the City’s resilience to the impacts of climate change to benefit current and future generations.

“The revised Climate Change Adaptation and Mitigation Strategy provides updated direction to help the City plan for and respond to the effects of climate change,” said Mayor Roberts.

“Along with the Urban Forest Plan, which is currently in development, and the City’s status as a signatory to the WALGA Climate Change Declaration, this Strategy will enable us to reduce our carbon footprint, and guide us in developing innovative plans to protect and enhance our natural environment and the lifestyles of future generations.

“The voice of our youth is incredibly important and the City’s engagement with our community means we can make significant progress on this important issue.”

“Given the City’s diversity of ecosystems, all of which are impacted in some way by the effects of climate change, a comprehensive strategy to mitigate and adapt to the impacts of a changing climate is critical,” Mr Butt said.

“The Climate Change Adaptation and Mitigation Strategy is an excellent development for the City of Wanneroo that demonstrates a proactive approach to addressing and understanding the impacts of climate change on our environments, both built and natural.”

“It’s encouraging to see the City has acknowledged the feedback provided at the Youth Climate Forum held in December last year,” he said.

“It’s gratifying that our comments were taken into consideration when planning the City's future.

“When communities and local governments work together, anything is possible.”

Mr Campbell said the Strategy also identified that education on climate change is in demand, including the need for effective environmental and sustainability-related messages delivered to students, businesses and households.