Celebrate an iconic Australian television show’s milestone birthday with a visit to the Happy Birthday Play School: Celebrating 50 Years exhibition in the City of Wanneroo. 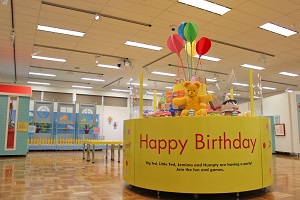 The National Museum of Australia’s hugely popular travelling exhibition, which began in 2016, opened at Wanneroo Gallery on 26 May featuring people with games and stories to tell from Australia’s longest running children’s television program.

City of Wanneroo Mayor Tracey Roberts said the exhibition represented a thrill for youngsters and a delightful dose of nostalgia for parents and grandparents who grew up watching some big-name and much-loved presenters teach crafts, read stories, sing nursery rhymes and role play with handcrafted toys.

“The City is incredibly honoured to be the only metropolitan gallery to host the exhibition, especially given Play School has been a significant part of children’s educational television in Australia for so many years,” said Mayor Roberts.

“It is a wonderful opportunity to introduce children to the history of the program and their favourite characters over the July school holidays.

“There will be so much to experience at the exhibition with favourite Play School characters like Big Ted, Little Ted, Jemima and Humpty, plus songs and games.

“Visitors will be able to take photos of iconic props spanning the past six decades including the famous clocks and windows, learn fascinating facts about how the show was made and have fun with quizzes and interactive activities.

“The Wanneroo Gallery is open wide, so come inside and celebrate Play School’s 50th with us before the exhibition finishes!”

Play School first aired on 18 July 1966 and quickly became a cornerstone of Australian television, education and culture. Today, it continues to captivate families with more than one million viewers tuning in each week.

National Museum of Australia Senior Curator Sophie Jensen attributed the show’s ongoing to success to the team in front of and behind the camera.

“Adults and children across the country enjoy the program each day – picking favourite toys and presenters, choosing which window to go through, telling the time on the Play School clock, making craft, listening to stories, dancing, singing along and generally having fun,” she said.

“Inevitably, the key reason for this success lies with the team of people who work in front of the camera and behind the scenes, putting the program together.”

The City’s gallery is the only opportunity to see this free exhibition in metropolitan WA before it departs on 14 August for the Museum of Geraldton, where the tour will finish.

Entry to the exhibition is free with bookings only required for groups.

For more information, go to www.wanneroo.wa.gov.au/playschool