The City of Wanneroo has continued its commitment to sustainable transport by introducing electric vehicles and hybrid technologies and further evaluating alternative fuel technologies. 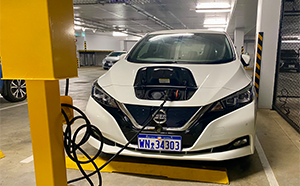 Two electric vehicles and eight hybrid vehicles have been added to the City’s fleet to help reduce greenhouse gas emissions.

This is important because as the number of households in the City grows, so will the need for collection of general waste, recycling, bulk rubbish and bulk green waste.

“We all have an obligation to make the effort to reduce our carbon footprint, and it's important in local government to embrace and promote new technology wherever we can,” he said.

“The City is committed to a greener future and to creating a sustainable City that balances urban growth and the environment, while planning for climate change and managing waste and its impacts.

“Changing the City’s waste trucks when they are due for replacement to lower emissions vehicles or alternate fuel technologies such as hydrogen-powered vehicles has the potential to help the City achieve this target.”