A local government extraordinary election will be held on Friday, 2 September 2022 in the City of Wanneroo. 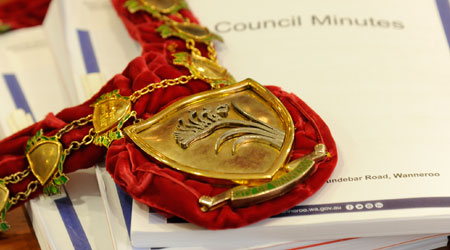 This extraordinary election is to fill the following vacancy:

Nominations must be lodged with the Returning Officer:

Candidates are required to lodge with the Returning Officer:

The Commission has developed an online system called Nomination Builder to assist candidates to complete their nomination form which includes the candidate profile. This is the preferred method of completing the nomination form and profile for elections conducted by the Commission. Candidates complete their nomination details and profile, print the completed form which has a reference number allocated and lodge it with the Returning Officer. The nomination builder can be accessed at www.elections.wa.gov.au.

Where an agent lodges a nomination on a candidate’s behalf, it must be in the prescribed form with a written authorisation signed by the candidate.

The documents may be hand delivered or posted to the Returning Officer and must be received by the close of nominations.

Full details about eligibility and nomination procedures for prospective candidates can be obtained by contacting the Returning Officer, Kelly DANSIE on 0458 805 518 or the Western Australian Electoral Commission on 13 63 06.