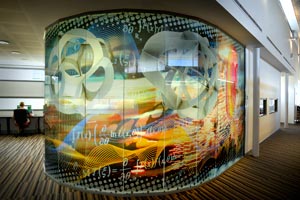 Artist Rick Vermey said the idea behind the Teen Screen was to create digi-glass panels, which would provide some privacy for teenage library users.

It was a challenge to produce an artwork with imagery, both relevant to youth and yet with a somewhat timeless message. The glass partition includes handwritten notes from a Leonardo da Vinci sketchbook, mathematical formulae, binary code, books and quill pen floating across the surface, as well as images of the other artworks in the Wanneroo Library and Cultural Centre. 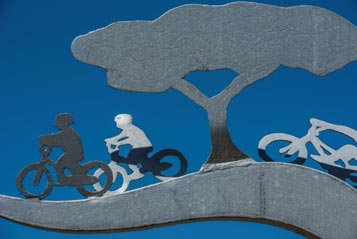 The Somer Tree is a soaring, steel, tree-like sculpture standing 3.8m and topped with four curving arms, or branches, which point in different directions. One branch points to the sea, one to the Somerly estate itself, one to the Clarkson train station and one to the children’s bushland bicycle trail.

Each of these branches is adorned with elements representing the designated area – boats, nesting birds, a train and children riding bikes.

Artist Tony Pankiw conceived the design of Somer Tree because: 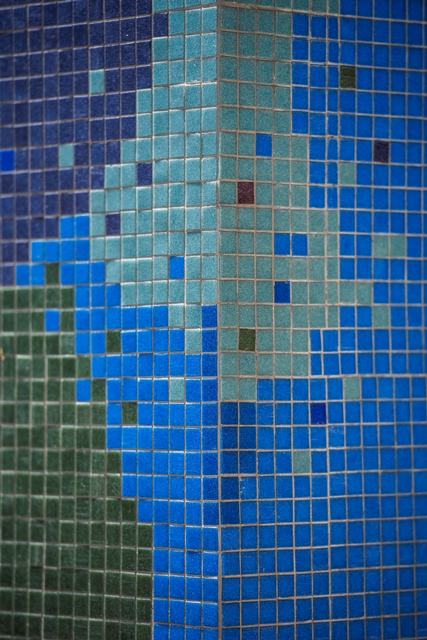 Artist Philippa O’Brien created a suite of three arches, an ocean abstract and a column (Sea Architecture) in Mindarie near the marina, which are clad in Bisazza glass mosaic tiles from near Venice in Italy.

In creating this artwork Philippa responded to the meeting of the sky and the sea, and the colours of the ever-changing ocean-side light.

This blue arch, in Salford Promenade, acts as a doorway or a window to frame the ocean-side light and colour, while framing a moment in time. Starting with the delicately coloured arch by the water, the artworks form a procession from the sea via a sequence of mosaic stairways.

To quote Philippa; “For me, this formal landing place is reminiscent of mythical heroes and heroines stepping ashore, to be ceremoniously welcomed home from great ocean voyages.”

Public Art of the Month - September 2019

In 1878, four years after the closure of the first school in the area, the Wanneroo Settlers Association looked to build a new school. However it took the donation of 5 acres of land and £5 towards building costs from local landowner John Buckingham, for the project to begin.

Classes commenced in the new Wanneroo School on the 30th January 1899 on the corner of Wanneroo and Dundebar Roads, with 14 students and teacher, Charles Shaw.

The Old Schoolhouse is currently in Neville Park, next to Buckingham House and is still utilised for educational purposes.

This blackboard artwork, Schooling in Wanneroo, was designed by Bryce Kershaw and is part of the Cultural and Civic Trail (a walking trail through Wanneroo Townsite) and is a celebration of early education in Wanneroo. 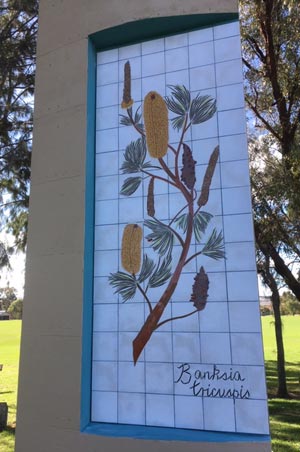 The Banksia Tricuspis is based on Perth's flora; they are part of the conservation and reinvention of the seven pre-existing artworks within Ridgewood Park. The first one was based on the Kangaroo Paw and the newly installed design shows Banksia Tricuspis. Workshed Mosaics (Lisa and Paul Petale) had fun working with the Merriwa Primary School students to create this latest piece. One of the primary school teachers commented “… the kids loved it. My class kept asking if you were coming back every week?”. 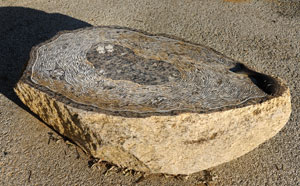 The Boat Rock artwork is a large slice of granite moored in Harford Park in Yanchep, which refers to a long-ago shipwreck. Across the polished surface of this rock are engravings of an ocean teeming with fish, whales and seabirds. Various boats are sailing through this watery panorama, one of which is The Emily, Captain Harford’s boat which was lost off the coast of W.A. in 1868.

The story of the wreck is etched around the perimeter of the rock, the words set amidst the flowing water as if the tale is being carried along by the waves. People can trace the story with their fingers as well as touch the cast bronze fish embedded in the rock. When making this piece, artist Kati Thamo searched for a long while to find a rock that was shaped like a boat. Once located, it was sliced in half and polished. Kati then spent weeks sitting atop the rock, hand cutting the stencil to create the detailed imagery. “I wanted the design to flow around the rock like a ship sailing around the world with the ocean currents.” 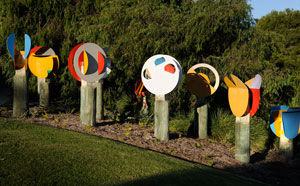 Yanchep Bloom is a series of sculptures by artist Don Walters and is sited at Old Nursery Park in Yanchep. It consists of twelve sculptures that celebrate the park’s former use as a garden nursery and the likely source of many of the now mature trees in the Yanchep/Two Rocks area. Solid, recycled timber poles harmonise with the natural environment and support brightly coloured and folded circular steel forms.

Yanchep Bloom was designed for multiple interpretations, for example, as flowers unfolding into full bloom or, in combination with the timber, as a stylised forest of trees.

The artwork is a constant acknowledgement of Old Nursery Park’s past and a joyful and visually stimulating installation that echoes the dynamics of the site and the community’s involvement with it. 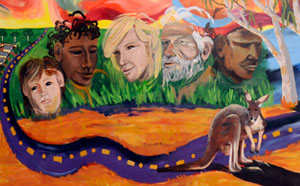 Artist Celestin Hutchinson was commissioned by the City in 2007 to complete a 2.4 x 10.5m mural in acrylic paint on the westerly wall of the newly constructed Carramar Community Centre.

The Old Wanneroo Road borders a half-size basketball court and utilizes warm earthy colours to convey the Australian landscape, its texture and warm glow. It also features the portrait of an Aboriginal man in amongst the ghost gums. The design expresses the spiritual elements of place.

Although the artwork is now over ten years of age, it has stood the test of time and is still in fantastic condition, resonating beautifully with the surrounding community. 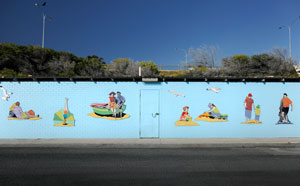 Quinns Beach Life is made from 10 freeform mosaic pieces, originating from photographs of historic and current Quinns beach life and activities which were collected from the surrounding community.  This public artwork has been placed on a vibrant blue background, to mirror the beauty of the foreshore.

Like many pieces of public artwork, the work engenders a sense of place and community, reflecting its location and bringing interest and joy to the observer, whether they are parking in the carpark, walking the dog or jogging past. 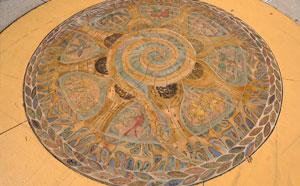 Place of Flowers is a very beautiful public artwork, created by proud Nyoongar woman and Ballingup artist Sandra Hill, and ceramic artist Jennifer Dawson. The work is located in the heart of Ferrara Reserve in the suburb of Girrawheen. It depicts the Nyoongar six seasons in ceramic tiles and is a great discovery when ambling along the park’s pathways, near the children’s playground.

Through their works, which have been exhibited widely and feature in major public art collections, Sandra Hill and Jennifer Dawson are always endeavouring to diminish the gap between Indigenous and non-Indigenous Australians. Working collaboratively together, Jennifer and Sandra have created an expertly crafted and lasting tribute to unity with each other and with this land. 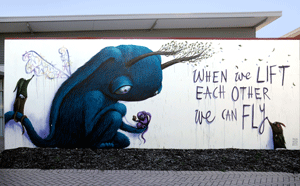 In 2015 the City of Wanneroo invited Hayley to conduct a series of workshops with the Year 6 students at Butler Primary School. During the classes, the artist and students discussed the concept that “at every crossroads in life we hear little voices. The loudness of life muffles them sometimes, but they’re still there - listen… one voice is fear and the other is love...” This theme is explored throughout Hayley’s arts practice.

As part of the workshops the Year 6 students modelled imaginative monsters based upon themselves; and helped design and paint some of the mural as an entrance statement for the nearby Butler Community Centre. Together they composed the positive message 'When We Lift Each Other We Can Fly'.   Inspired by the Little Voices of the students, the Butler community celebrated the mural on 26 February 2016. This unique artwork encourages us all to enjoy the wonder of childhood and is a reminder to listen to our own little voice. 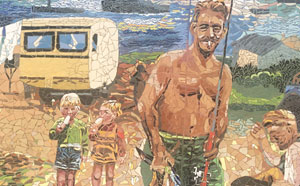 This beautiful mosaic was designed by artist Danka Scholtz Von Lorenz in collaboration with a training program to introduce a select group of participants to the art of mosaics. Fisherman’s Hollow is the wonderful outcome of this collaboration. It commemorates one of the historic sites that constitute the very fabric of the cultural landscape within the City of Wanneroo. Fisherman’s Hollow is a 600m long section of shore opposite Yanchep Lagoon. Vegetated bluffs surround the site, providing natural shelter, which make it an ideal location for human habitation.

It was used by Aboriginal people, but since the 1900s the area has been frequented by holiday makers and fishermen, giving the site its name. Indeed, during the 1940’s and 1950’s it was home for fishermen and their families. This makeshift community comprised mostly of individuals who lived off the land and sea, favouring an unencumbered existence as a lifestyle choice.