The City of Wanneroo is proposing to enter into a Memorandum of Understanding with the Wanneroo Trotting and Training Club to activate a temporary emergency animal relocation area at Nanovich Park. 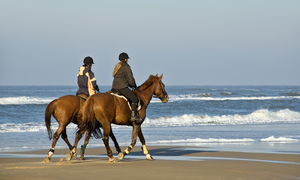 In the event of an emergency evacuation, residents of affected areas will be able to relocate their horses and other animals to the facility, where safe accommodation, food and water will be provided for the animals.

City of Wanneroo Mayor Tracey Roberts said the agreement was an important step towards ensuring the City of Wanneroo and neighbouring local government areas were prepared for any future emergency evacuations.

“During the devastating Wooroloo and Hills bushfires in early 2021, the City activated an emergency animal welfare evacuation point at the Wanneroo Showgrounds to provide support to residents in the City of Swan,” Mayor Roberts said.

“While we were pleased to be able to provide an evacuation point at the Showgrounds last year, there were many complexities involved in setting the facility up, such as maintaining separation between animals and accommodating large animals such as horses.

“The Wanneroo Trotting and Training Club facility at Nanovich Park already has appropriate amenities in place to accommodate animals, including capacity to house 150 horses, and is a much more suitable location.

“On behalf of the City, I would like to thank the Wanneroo Trotting and Training Club, who have been incredibly supportive of the plan.”

The City of Wanneroo has a Partnering Agreement with the North and East Recovery Group, comprising seven other local governments including Joondalup, Stirling, Bayswater, Swan, Bassendean, Kalamunda and Mundaring, for the provision of aid during emergencies.

“While we hope there is never a need to activate the facility, it is excellent to have the agreement in place and for the City and our neighbouring local government areas to know that we are prepared to respond in an emergency,” Mayor Roberts said.

Wanneroo Trotting and Training Club President Max Rayner said that the club was proud to be working alongside the City to give back to the community.

“Our members have really embraced the opportunity to help out the community,” Mr Rayner said.

“We are all passionate about horses and many of our members were impacted in the last bushfires and needed to find safe places to evacuate their horses to.

“Everyone is much more comfortable knowing that there is a safe location with a fire break, fencing and wash-down facilities, where they can bring their horses in any future emergencies.”

The Memorandum of Understanding is the latest step taken by the City to implement the actions laid out in the State Emergency Management Support Plan, developed by the Department of Primary Industries and Regional Development.

More information about the City’s emergency management is available at: wanneroo.wa.gov.au/emergencymanagement