; Have your say on the Alkimos ARC design - City of Wanneroo
Menu
Navigation
My Wanneroo Register Sign in

Have your say on the Alkimos ARC design

City of Wanneroo Council resolved to release the concept design of the Alkimos Aquatic and Recreation Centre on Tuesday, 16 November and invites the community to have their say. 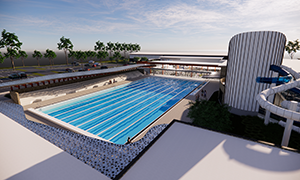 The proposed concept design for the facility features indoor and outdoor swimming pools, gym and fitness facilities, a crèche, café, change rooms and a car park.

City of Wanneroo Mayor Tracey Roberts said she was excited for the community to see the concept design for the facility, given the strong public support for the project.

“The construction of a public swimming pool and recreation facility in our northern coastal suburbs has been a high priority for the City for a number of years,” she said.

“This concept design was developed following extensive community consultation. The City received over 1,100 responses from residents of the northern corridor who showed strong support for this concept.”

Residents are encouraged to provide feedback on the concept design during the community consultation period, which runs until 28 January 2022.

Have your say here.