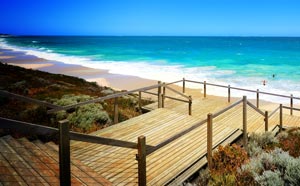 The City’s coast stretches 32 kilometres from Tamala Park in the south, to Two Rocks in the north. Wanneroo’s coastal foreshore is relatively undeveloped, especially when compared to the coastline further south. The City’s ocean coastline is an extraordinary natural asset for the City and has been an important stimulus to the urban growth of the coastal corridor. Due to climate change and an estimated rise in global sea levels, the City closely monitors and manages the coastline which is becoming increasingly more vulnerable.

The City’s Coastal Management Plan Part 1 identifies a number of key issues affecting the City’s coastline and proposes ways in which these issues can potentially be addressed. The CMP has been developed in two parts. Part 1 of the CMP introduces the Wanneroo coastline, describes a number of issues related to use of the coastline, documents existing and proposed facilities along the coast and proposes the potential ways in which known issues could be resolved. Part 2 will provide more information regarding existing management regimes and how they may need to be adapted as the City evolves and will guide the development of future projects to ensure sustainable use of the coastline (currently in development).

The City of Wanneroo has a number of recently completed and ongoing coastal management works relating to the management of coastal erosion issues, maintenance of coastal protective structures, beach access and coastal monitoring.

Further information can be found by clicking below:

In addition to the work being carried out by the City, planning of the City’s coastline plays a large part in its ongoing monitoring and management. Foreshore Management Plans are a requirement for all developments affecting the coast and provide detail on future land uses within foreshore reserves with the aim to minimise the impacts of development.

See the Foreshore Management Plan Guidelines for more information on the process for assessment as well as the preparation and submission requirements for foreshore management plans. For a list of all FMPs that have been endorsed by Council to date and a map of the Wanneroo coastline that illustrates the applicable areas see below: